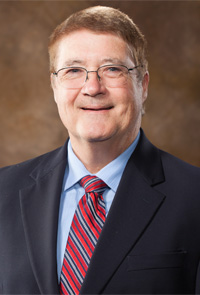 Dr. Greg Parnell, research professor of industrial engineering, has been named director for the operations management graduate program within the Department of Industrial Engineering. With both live and online classes, the Master of Science in Operations Management graduate degree program continues to be the University’s largest graduate program. It attracts working professionals from all branches of the military, civil service, and corporations from around the country who seek graduate education in operations management tools and techniques.

Parnell joined the industrial engineering department in August 2013. He is retired from his position as professor of systems engineering at the U.S. Military Academy at West Point. He has also served as a distinguished visiting professor at the U.S. Air Force Academy, associate professor of mathematical sciences at Virginia Commonwealth University, and head of the operational sciences department at the Air Force Institute of Technology.

Parnell’s research focuses on decision analysis, risk analysis, and resource allocation for defense, intelligence, homeland security, environmental, and energy applications. He has received over $2 million in research funding over the course of his career. At the University of Arkansas, Parnell is working with two research centers within the department. In the Center for Innovation in Healthcare Logistics, he uses decision analysis techniques to determine ways to improve the healthcare supply chain. He is also performing research through the Center for Excellence in Logistics and Distribution on an Army stationing project for the U.S. Army.

“We are pleased to have Dr. Parnell in this role. His research expertise and national acclaim will enhance the research program within the department,” said Ed Pohl, industrial engineering department head. “In addition, his leadership experience along with his military background will allow him to capably direct and advance the operations Management graduate program.”

Parnell holds a bachelor’s degree in aerospace engineering from the State University of New York at Buffalo, a master’s degree in industrial and systems engineering from the University of Florida, a master’s degree in systems management from the University of Southern California, and a doctorate in engineering-economic systems from Stanford University. He is a Fellow of five professional societies; the Institute for Operations Research and Management Science, the Military Operations Research Society, the International Committee on Systems Engineering , the Society for Decision Professionals, and the Lean Systems Society. He is a retired Colonel in the U.S. Air Force, author of over 100 publications, and co-editor of the Wiley & Son’s Decision Making for Systems Engineering and Management, second edition, and co-author of the Wiley & Sons’ Handbook of Decision Analysis.