The Arkansas Alumni Association announced the 2020 Seniors of Significance in January. A total of 71 graduating seniors, commemorating the university's founding date of 1871, were selected from more than 600 nominations and represent each University of Arkansas undergraduate academic college. These Seniors of Significance were selected based on their academic achievements, leadership skills and extracurricular campus and/or community activities. 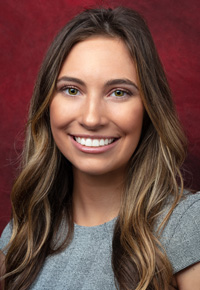 Lexxy got involved early in college by becoming a member of Phi Mu Fraternity, where she has held several leadership positions, and by becoming and Honors College Ambassador. Since then, she has worked on campus as Supplemental Instruction Leader for Principles of Biology and as a Peer Mentor for the College of Engineering for 3 years. She is also involved in several student organizations including Tau Beta Pi, the Society for Women Engineers, Engineering World Health, Greek Life Facilitators, the Red Cross Student Organization, and Alpha Lambda Delta Honors Society, where she holds the position of treasurer.

Within the Department of Industrial Engineering, Lexxy holds the position of president of the student chapter of the Institute of Industrial and Systems Engineers, is a very active member of Alpha Pi Mu, helped start and serves on the department's technology committee, works as a technical assistant for Introduction to Operations Research under Dr. Kelly Sullivan, and serves as a capstone project manager.

She is working on research to characterize and predict statin use among pre-diabetic patients using data analytics and machine learning. Lexxy presented her findings at the INFORMS Annual Meeting 2019 in Seattle, Washington where she was one of the few undergraduate presenters. She is currently working on turning her research into a journal publication with the help of her mentor Dr. Shengfan Zhang.

Lexxy interned for the Azek Company in Wilmington, Ohio as an engineering intern in the summer of 2018, Burns & McDonnell in Kansas City, Missouri as a technology consulting intern in the summer of 2019, and is currently at the Hershey Company in Bentonville, Arkansas as an advanced analytics intern. She plans on completing a master's degree in industrial engineering in May 2021 and will be spending her summer interning in engineering and technology for J.B. Hunt in Lowell, Arkansas. 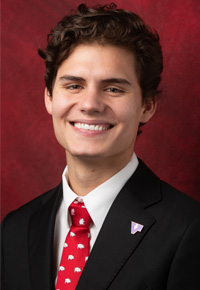 Karlton is from Rogers, Arkansas. He currently serves as the vice-president of operations at the Volunteer Action Center and as the president of Alpha Pi Mu, the industrial engineering honors society.

During the past four years, Karlton has been involved with the Honors College, the Volunteer Action Center, Alpha Pi Mu, the Institute of Industrial and Systems Engineers, and Pi Kappa Alpha fraternity. Karlton is actively working on undergraduate research with Dr. Kelly Sullivan as part of his honors thesis. Together, they are working to create a new metric for measuring the coverage of a wireless sensor network.

During his summers, Karlton has been involved in a variety of activities. After his freshman year, he lived in Otoxha, Belize for seven weeks. There he worked with two other University of Arkansas students to plant a men's church group. Following his sophomore year, he worked as a summer researcher in the industrial engineering department. In summer 2019, he studied abroad in Israel and interned at Walmart in its Accounting and Finance Development Program.

After graduation, he will begin working at the Walmart Home Office, where he accepted a position in a two-year rotation program. Off-campus, Karlton has served the community by helping run an afterschool program through the Yvonne Richardson Community Center, leading a project with 50 volunteers during Make a Difference Day, and helping plan and organize events for international students.

He has been awarded full education funding and over $10,000 in additional funding for research and study abroad. He was selected for the 2020 Homecoming Court and has been on the Chancellor's list every semester on his college career. 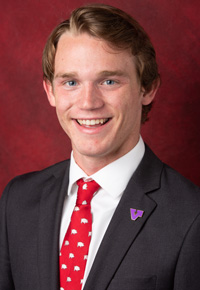 Alexander “Zan” Johnson, is an Honors College Fellow. He has been working on research with associate professor Ashlea Bennett Milburn. The project, “Reducing Access Disparities in Emergency Response,” is funded by a state undergraduate research fellowship through the Arkansas Department of Higher Education.

The goal is to identify the best locations for shelters during a natural disaster, with an eye toward protecting vulnerable populations. “Through this research I have been able to apply the knowledge I have gained through various classes to an important issue,” Johnson said. “I have enjoyed the relationship I have been able to form with my research mentor and the skills I have gained the process. I will also complete my Honors thesis on this research next semester.”

Johnson has had the opportunity to study abroad three times thanks in part to the Imhoff Global Studies Scholarship.
“Through my service learning trips to Mozambique and Belize I was able to use my engineering background in situations with extreme resource and time constraints in backyard farming systems and water filtration projects,” he said. “Although this work will likely not be applicable to the job I have after school, the leadership and teamwork skills I gained will benefit me.”
“Through my time in Israel I was able to see how my degree will be useful in the field of startups, which were the focus of the trip. Getting the opportunity to interact with a culture dedicated to innovation was exciting and inspiring. I can see myself pursuing a start-up venture and the interactions I had on this trip will help shape those opportunities.”

Zan was selected as the 2019 Homecoming King, in addition to his role as Homecoming King, Zan serves as the president of the Volunteer Action Center and as the founder and president of the Club Running team. He has completed two internships, one with Black and Veatch of Overland Park, Kansas, and one with Wilson Coker Wealth Advisors, of Rogers, Arkansas. Johnson has also received the John L. Imhoff Service Award, and was a finalist for the Schwarzman Scholarship. 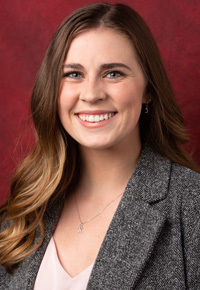 Kayla has participated on the university women’s soccer team for the past 4 years. For the past two years, she has served on the team’s Leadership Committee. Throughout her soccer career she has had multiple achievements including the All-Freshman Team in 2016, the SEC All-Tournament Team in 2016 & 2018, and the All-Region Team in 2018. Additionally, she has also been a part of many Athletic Directors and Champions Lists.

To give back to the community, Kayla volunteers her time in soccer camps run by the University. The camps take place three times a year, with campers ranging from 5-18 years old and all different levels of competitiveness. She also takes part in volunteering activities with the team such as the annual ‘Lift Up America’ drive, working with the NWA Children’s Shelter, and spending time at the local animal shelter. She is also a member of Alpha Pi Mu, the Industrial Engineering Honors Society.

In summer 2019, Kayla accepted an internship working with OneStone as a technical solutions engineer. After graduation, she will be finishing her final year of eligibility while pursuing a Master of Science in Engineering Management. She hopes to travel the world before beginning a career in engineering in the fall of 2021. On being chosen as a Senior of Significance, Kayla commented, “I am incredibly honored to have been chosen among all of the talented students that are at the University of Arkansas. Being taught under such a distinguished industrial engineering faculty has prepared me better than I could have imagined for the future. I am so grateful for my family and friends for their support throughout these years, and I will cherish my time here forever.” 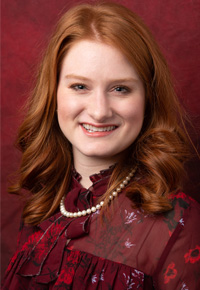 Caroline began her studies at the U of A in Mechanical Engineering, as a result of an internship she did over summer of 2018 at the Dillard’s corporate office, she transferred to Industrial Engineering and has loved it! She is originally from San Diego, California but calls Fort Smith, Arkansas home presently.

On campus, Caroline is active in the Delta Gamma Sorority, previously serving as the Founding Director of Scholarship. She is also active at St. Thomas Aquinas Church, with the Tau Beta Pi and Alpha Pi Mu honor societies, the Institute for Industrial and Systems Engineers, and a weekly bible study. Currently Caroline serves as the social chair of Alpha Pi Mu.

She shares, “Away from school, I love getting lost in the piano music of Claude Debussy, attending symphonies, kayaking, watching Razorback gymnastics and football, shopping, reading Shakespearean Comedies, and of course I never miss a moment to spend time with family and friends.” Caroline says, “I had the time of my life representing the University of Arkansas as an exchange student at the University of Newcastle during the spring 2019 semester! It was neat to experience a different approach to academia, to meet students from all around the world, and to share my own interests and values. I am forever in debt to the Arkansas Academy of Industrial Engineering for their generosity and support of my experiences in Australia.” She shared “I especially thank Mr. and Mrs. Brian Henley and the Larry Stephens family for generously awarding scholarships for the current academic year and promise to do everything in my power to pay it forward.”

In all, the College of Engineering had 18 Seniors of Significance for 2020. The complete list is here.